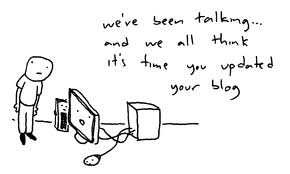 What is one of the greatest things about America?  Hamburgers and Fries? Baseball?  Well, yes and yes, but the one thing the US takes pride in is our freedom of speech.  In today’s world, there are limitless ways for your voice to be heard.  You can update your status on Facebook, squeeze your thoughts in 140 characters on Twitter, wear a t-shirt, march near the white-house lawn, and of course like some of us, you can write a blog.

Many people create blogs to express their thoughts whether it’s about their business, our government, religion, or just about our daily encounters in life.  It is a way to connect with someone and engage in conversation.  Imagine if there were laws restricting our blogging rights.  I can’t even begin to think about the uproar this would cause.  Well this issue is exactly what Saudi Arabians face today.

As of January 1st 2011, new laws have gone into effect regulating blogging rights and laws.  To cover some of the basics, Non-citizens cannot write about news, those commenting are encouraged to register with the government, and those blogging about religion are urged to be “very careful.”  Blogs are now being classified as “electronic publishing” and news blogs are now subject to the same legal ramifications as newspapers.  Among those who now have to follow the strict guidelines of newspapers are news blogs, internet news sites as well as “internet sites containing video and audio materials.”

The new laws require three qualifications to be a blogger:

While this may not appear to be an issue at first, Fast Company reports that about 1/3 of the population in Saudi Arabia does not possess a high school diploma.  Those who have not graduated from high school can range from the poverty stricken South Asian migrants to the well-off Western oil workers.

Another “minor-detail” in the regulation requires all new bloggers to provide the Saudi Arabian government with detailed information about their hosting company.  This would give the government the ability to block access to certain websites across domains or even force hosting companies to take certain sites offline.

The new laws have already caused a wave of protest.  Some are refusing to register with the government as they question specifics of the laws.  We have seen in the past that Saudi Arabia has sent bloggers to prison for expressing their views about government, religion, and corruption.  I’m sure more will come of this story in the next few weeks.

One thought on “What if Blogging had Laws and Regulations? In Saudi Arabia, it does.”