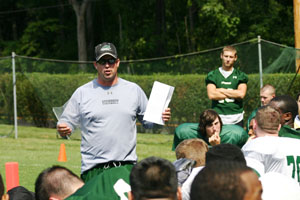 There must have been a huge sigh of relief at 11 p.m. on Saturday when, after a nail-biting double overtime, the Mustangs just squeaked into the end zone with a 16-yard touchdown. Celebration ensued amongst the spectators sitting in the brand new 3,5oo-seat stadium, erected on the site of the former Baltimore Ravens and Colts training complex.

But the real relief, I’m sure, was felt by the university’s new head football coach Ed Hottle, President Kevin Manning, and Stevenson’s entire marketing department. They’ve made a lot of promises and invested a lot of money in infrastructure, equipment, personnel and marketing hype preparing for this inaugural game. Investments to the tune of a $7 million football stadium and a reported $600,000 in building and operating the program each year.

All part of a more complex marketing plan. The goal, which is years in the making, has been to shed its small-time image and attract a “richer culture” of students, all in attempts to keep SU growing at an exponential rate.

What kind of return are they expecting? Stevenson Athletic Director Brett Adams estimated $3.5 million in revenue each year ($35,000 tuition x 100 football players) minus the noted $600,000 operating costs. That leaves plenty of excess that he says can spill over into the new school of business, the stadium, science labs, and everywhere else on campus.

Is it working? According to Manning in the Owings Mills Patch, “We’ve noticed just in the short time we’ve had [football] that more people are aware of Stevenson than ever before.” Real preparation began back in 2009, when Hottle began recruiting for and building the program from scratch.

Fresh off an expensive name-change re-branding campaign in 2008, the former Villa Julie College is obviously attracting more of the male demographic they were after. Their conservative goal of attracting 80 football players the first season – and bringing in enough funds to cover the loan that paid for building the stadium – was met early on. There are 125 players this first season.

One of the most popular t-shirts in the gift shop when I attended SU (not so many years ago) facetiously bragged “Villa Julie Football – Undefeated since 1952.” So far, the record still holds!