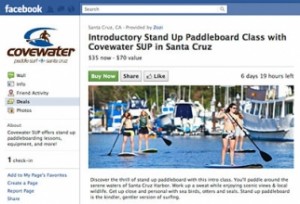 Facebook just launched their DEALS application! This means that sites like Groupon and LivingSocial are totally missing the cool new wagon to jump on. Yeah, yeah, deals are cool, but doing them alone is not that appealing. Facebook explains that they began this idea with the wish of bringing friends together and allowing people on the website to get together and have fun. This makes them completely different from other daily deal companies – it’s the social aspect of getting a cool deal and doing it with your besties! You can use your credits that you’ve been racking up from Farmville to use towards the deals, not just moolah from your very own pocket. And just for your information: the more friends you get to join in on the deal with you, the more of a discount you can get!

Facebook is not disclosing how much of a percentage they are receiving from the companies, unlike Groupon which takes 50% and LivingSocial which takes 40%.