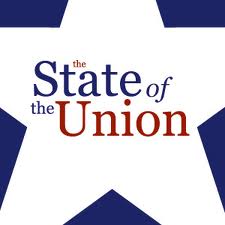 Social media that is.  Many of us who saw the State of the Union address last night probably did so by gathering around the television to see what our nation’s leader had to say.  That seems pretty normal.  But millions of Americans also gathered on social media sites to watch the event, offer up their opinions, or even take part in question and answer sessions.

On the C-Span Facebook page they offered a live video-feed of the address.  PBS also did the same thing though Ustream.  Watching online gave viewers the ability to comment and interact with each other based on what our President had to say.

The White House website even added some value to the State of the Union Address. As the president spoke about statistics or recalling events, the White House’s website team provided viewers with charts, data, pictures, and links to other sites to compliment what the president had to say.  This was a treat to viewers, especially those who are more apt to visual sensory modality than auditory.

Another big debate typically once the Address is complete is fact checking.  Critics love to find out if the numbers reported by our President are exaggerated or where he got his information from.  Last night the Sunlight Foundation, partnered with The Huffington Post, National Journal, CQ Roll Call, and the Center for Public Integrity, was able to fact check the entire address in real-time via social media.

By far the loudest buzz of the State of the Union Address was found on Twitter.  Hashtags of “#SOTU” or “#StateoftheUnion” were trending on Twitter and continue to do so today.  While Obama’s twitter account was sending out tweets with quotes from his speech, senators and congressmen in the audience were offering their opinions.

If you go onto Youtube today you can see a dark grey toolbar at the top. Here you can suggest a question for Mr. Obama himself with the chance that he will respond.  Thousands of questions have already been submitted  and people can vote on your question to help it reach the attention of the president.

The great thing about social media is that everything can happen in real-time.  The president spoke about an open government where information will be shared with the public and I think we got a good taste of that last night.