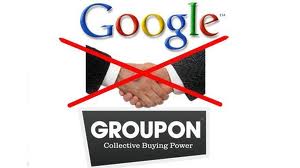 One thing is certain; Google will always be in the news.  Today Google is buzzing for a few reasons but one grabbing most headlines is co-founder Larry Page will be taking over as CEO. Eric Schmidt the current CEO is stepping down to a new role as Executive Chairman as he will oversee the company’s expansions abroad.  Larry Page had already been the company’s CEO more than a decade ago.  He led the company when they grew from two employees to 200, and now they have over 20,000 worldwide.

While this may garner a great deal of attention, Google was also seen in other headlines.  We saw last December that Google Can’t Have Everything.  Near the end of last year Groupon rejected Google’s offer of $6 billion to purchase the company.  Well now it appears if Google can’t buy it, they’ll just create their own.  Many around the web are reporting that according to leaked documents, Google is planning to create a Groupon competitor.

Google Offers may be the next email coming to your inbox.  Some of the key benefits they describe are the ability to bring in new customers with an offer, gaining exposure on Google ad networks, as well as getting paid quickly and up-front.  All you need to do is decide what product or service you would like to offer and Google will do all of the work.  They will create the offer making it compelling and engaging for readers and they will find out the best time to run the offer.  Sounds quite simple and eerily similar to Groupon.

Maybe Google was mad that Groupon declined their offer.  Maybe Google already had plans in place for a coupon service.  Or maybe this is all a giant rumor.  One thing is for certain though, this has to make the folks at Groupon a little bit nervous.