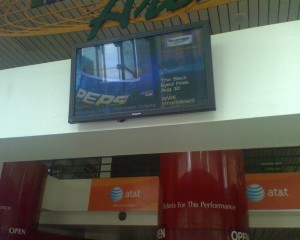 So what’s the deal with digital? We all know, and by this point love, everything digital. Even if we don’t honestly know what the letters LCD stand for we know it’s a good thing. And when it comes to high definition, whether we’re fast forwarding through infomercials or yelling at a questionable sports call (trust me, the World Cup in HD is totally worth it every four years), as viewers we like what we see.

But consumers aren’t having ALL the fun. Why should advertisers be so excited about digital? Because digital signage advertising is one of the most effective and cost-efficient forms of advertising, way out performing the reach and results of television, online, print, and practically any other medium.

Why should advertisers take a hitch on the digital bandwagon? Studies found that consumers are three times more likely to successfully recall digital advertisements as compared to television, and four times more likely than television ads. Nearly two-thirds of consumers say that digital signage advertising catches their attention – the highest level reported across all media surveyed, including billboards, magazines, TV, the Internet, newspapers, radio, and mobile phone advertising.

If you’re looking for numbers, take these for a spin. It takes an average advertising investment of $21 to reach 1,000 people via television. So how does that compare to the ROI for digital? Not even in the ballpark. In Baltimore’s 1st Mariner Arena, for example, advertisers will pay somewhere between $.05 and $.25 per impression on digital screens that will reach AT LEAST 14,000 consumers at each event.

We’ve just joined forces with Creative Visual Results (CVR) in a partnership with Baltimore’s oldest, biggest and most successful sports and events arena, 1st Mariner, to install digital screens that promise advertisers access to more than a million  consumers annually.

Digital is gaining popularity for advertisers across the world, and for good reason. It’s gosh darn effective! I dare you not to pay attention to that 50-inch high-def LCD digital screen. Go ahead, don’t look. Don’t look. Doooon’t…. see, you looked.