Over the past year, there has been a lot of debate about whether Facebook is dying out. Is it losing its fan base to other rising apps and networks, such as Instagram and Google+? Or is it becoming unpopular with teens because it’s just not the “cool” thing to use anymore?

While bloggers and analysts are treating the issues as some new scandal, we have seen this topic arise before when Twitter came on the scene in 2006. Everyone thought Facebook would lose out to Twitter, because Twitter was the new trend and more versatile than Facebook. However, Facebook responded by making itself more adaptable to the changing trends and incorporating Twitter into its very structure, thereby ensuring its survival. Now Facebook and Twitter coexist, and it is clear neither one is about to eliminate the other.

Facebook is really not in any danger of becoming obsolete. It is still considered a great networking tool that lets you connect with people that you may not get to see every day. Facebook has been around since 2004 and has only steadily increased users every year since its appearance on the market. Facebook is currently the #1 (most popular) social network worldwide, surpassing YouTube, Google+, Twitter, and Instagram by at least 20% account ownership and active usage (see graph below). In most consumers’ opinion, Instagram is the current biggest threat to Facebook. However, what most users might not realize is that Facebook now owns Instagram, therefore making the threat obsolete. 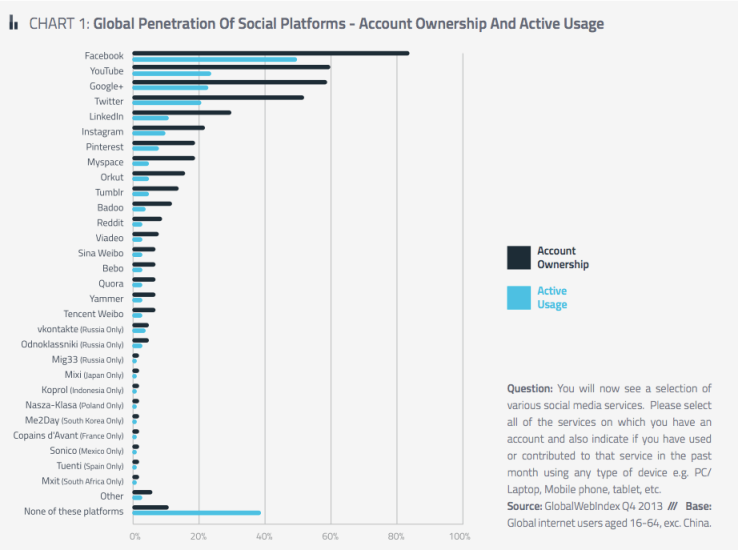 Basically, analysts and other opinionated bloggers can try to predict what they want about Facebook, but the facts seem to speak for themselves. Facebook has been around this long and is not going anywhere anytime soon.